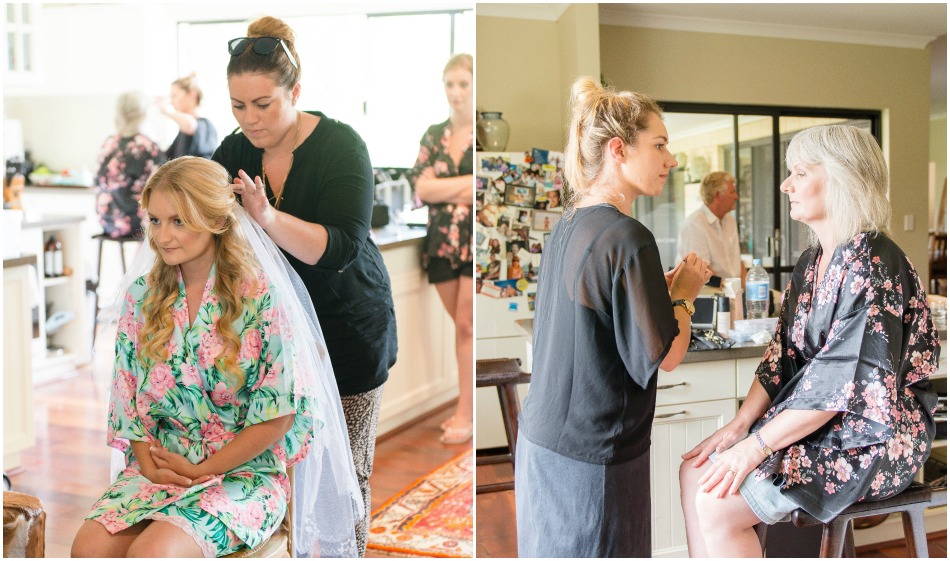 We gave ourselves seven months to plan our wedding. I downloaded an App designed to help you build a budget and keep track of your expenses. We over exaggerated our budget so that we would keep under it. I think originally we budgeted close to the $30K mark but I think in the end we managed to keep it to just over $20K. I learn't that making your own decorations can save you money but it does take up time. 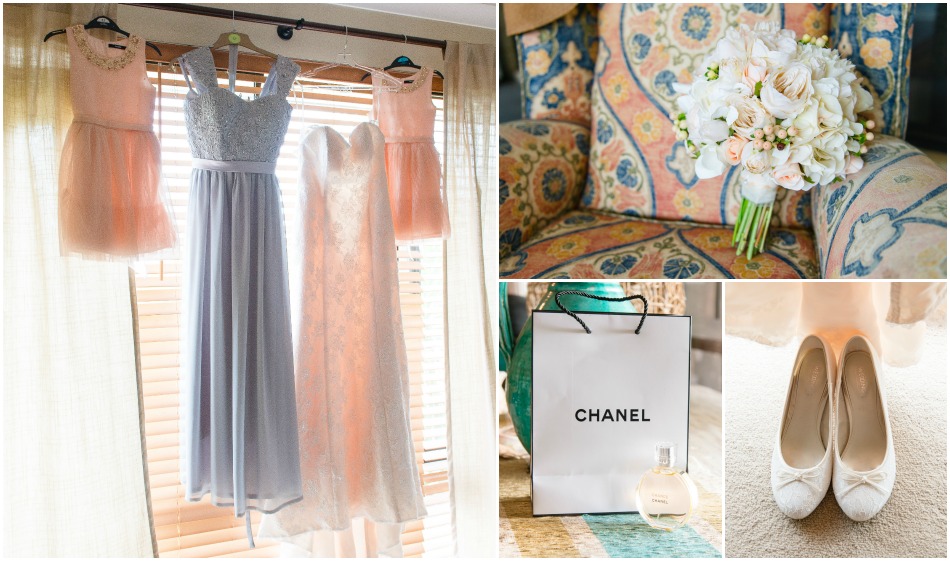 I went with blush tones that fit in with the bridesmaids dresses. The good thing about having silk flowers is the fact that the species you choose doesn't have to be in season. I had no idea what was going to be good at that time of year anyway especially with the hot weather we'd been having at that time. 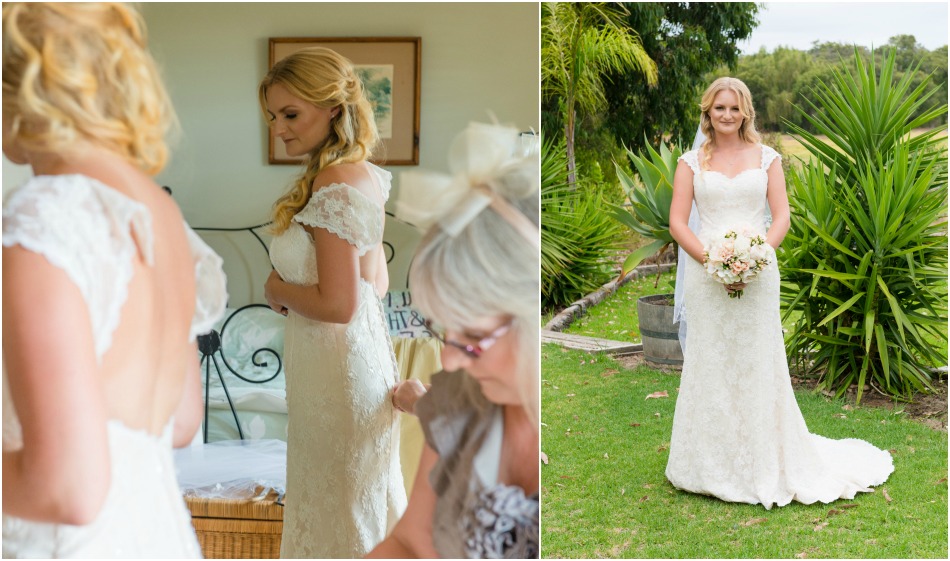 When it came to my wedding dress I was actually really naive, I had an idea of the style I wanted but it wasn't until 4 months before the wedding I went to try them on. I just assumed you picked one and then got it altered, I didn't realise how long it actually took to get made. I picked it up from Perth about 4 weeks before the wedding and luckily managed to find Fiona at Cavaney Couture to alter it down here.
I knew I wanted a lace wedding dress and had a soft spot for capped sleeves. My mum was over from the UK and I wanted to share this experience with her. My dress was the very first dress I tried on and after trying on about 8 others I kept going back to that one and comparing every single one to the first. In the end the assistant told me that if I was just putting it against this one, then maybe I had found it. To be sure I slept on it, for all I knew it could've been the excitement of trying on a wedding gown for the first time. So the next day I ordered it. I just loved the detail and the subtle hints of shimmer and the fact that it wasn't white. The cream colour actually matched perfectly with Georges cream suit. 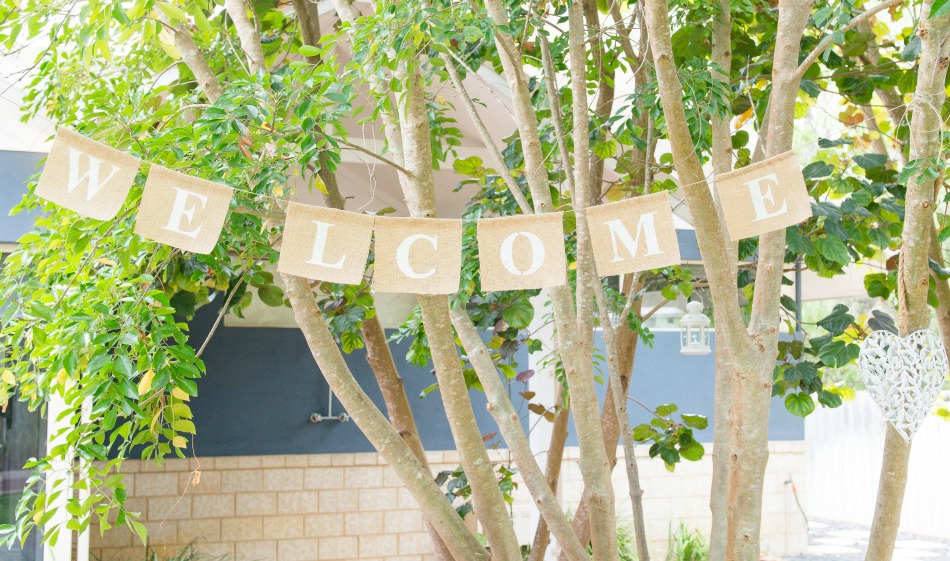 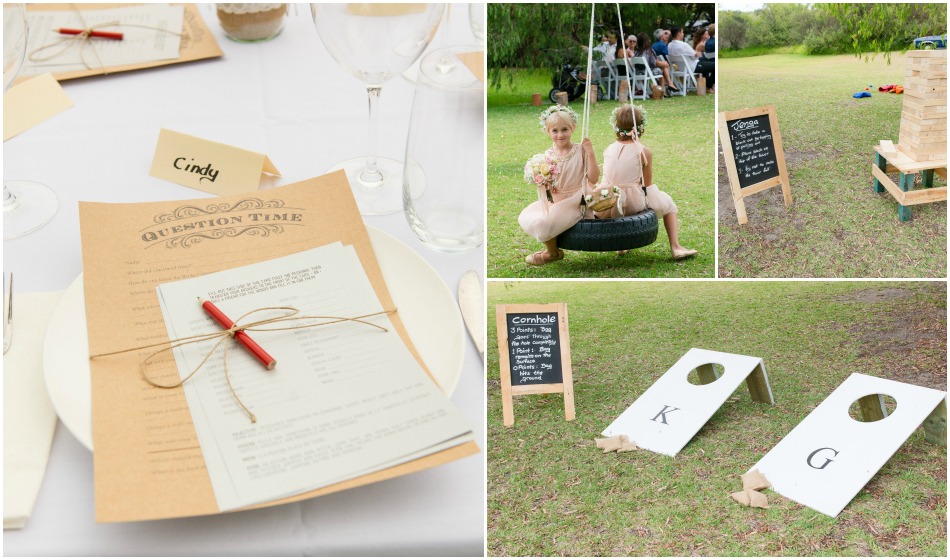 To occupy the guests, I created a questionnaire card full of questions and advise for the bride and groom, things like "where do you see us in 5 years time", "things a husband should never say to his wife..." Just a little bit of fun and something to reminisce about in the future. We also had disposable cameras on the tables with a bucket list of pictures to capture. 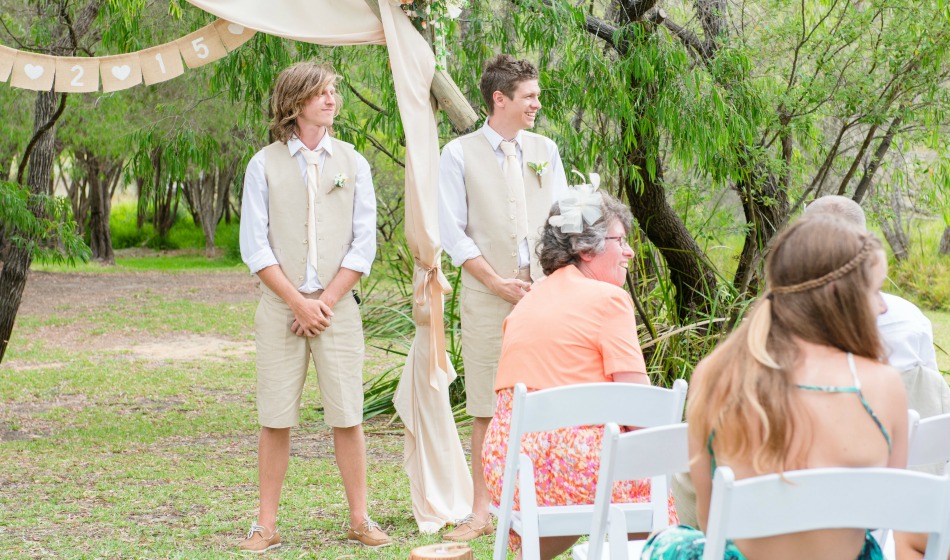 George actually worked very hard for this day and it made me feel so proud and honored that he put his heart and soul into it. George  professional is a caterer so of course he organised the food, made the most amazing cake and was up until the early hours of the morning prepping everything as he was too busy during the day making lawn games and wooden signs and chalkboards. The day before the wedding we spent all day setting and styling the venue in the scorching heat. He sorted out all the lighting, which I didn't actually see until the night, he was a trooper. 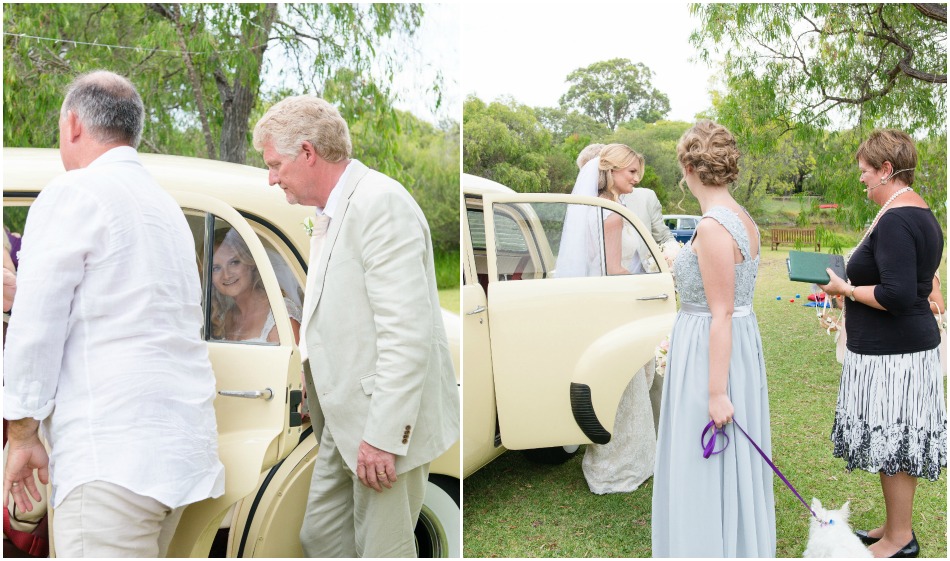 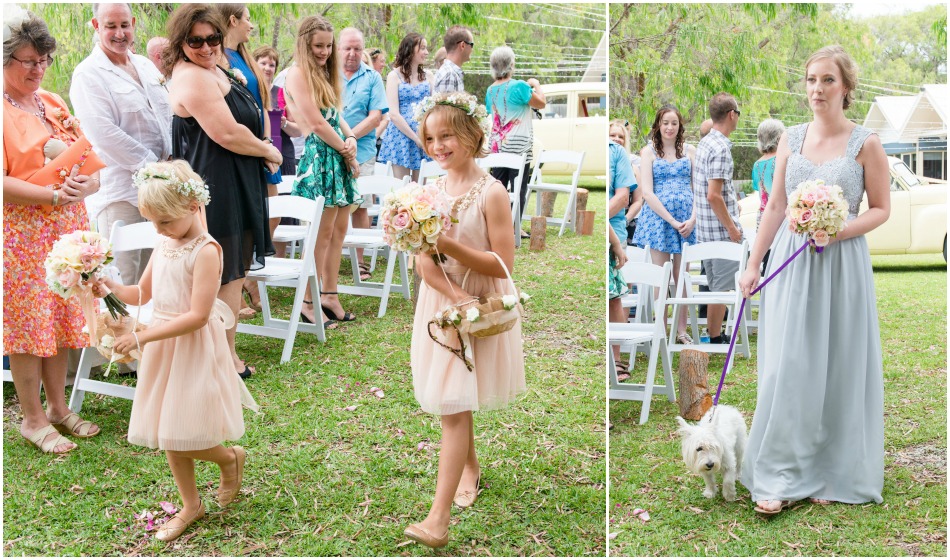 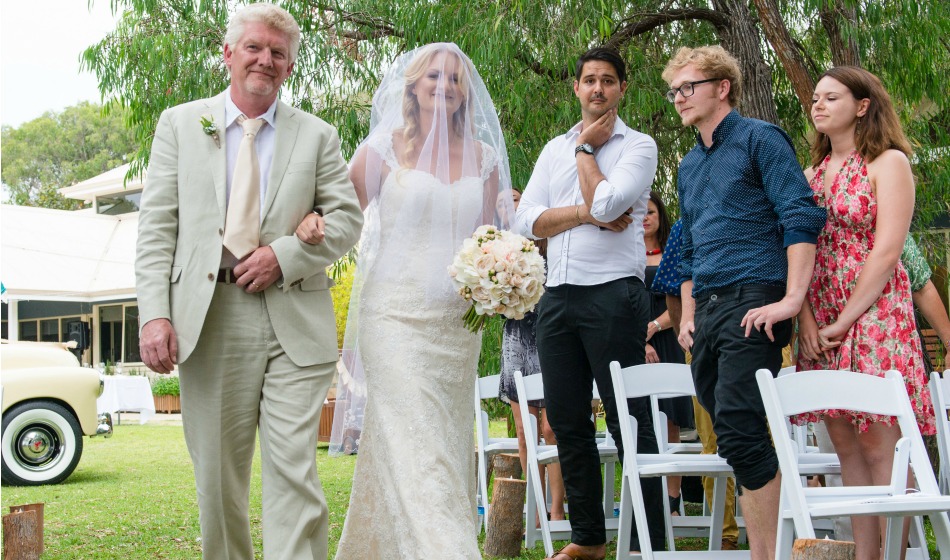 We choose our venue because we wanted something private and the freedom to do what we wanted when we wanted. Our location was unique and we knew that no one else had used this venue before. As we were getting married in February, we were conscious of the heat, especially for our English guests fresh out of winter so we chose a 3.30pm ceremony under the shade of the peppy trees. It was more like 4pm by the time the ceremony started, but its traditional for the bride to be late right? After the ceremony, we had family formals and drinks before we were whisked away to have our photos done.

Always take into consideration the travel time to you've chosen for location photo shoot's. I also never realised how hard it would be to get in and out of a car in my dress. By the third location though I had pretty much mastered it! 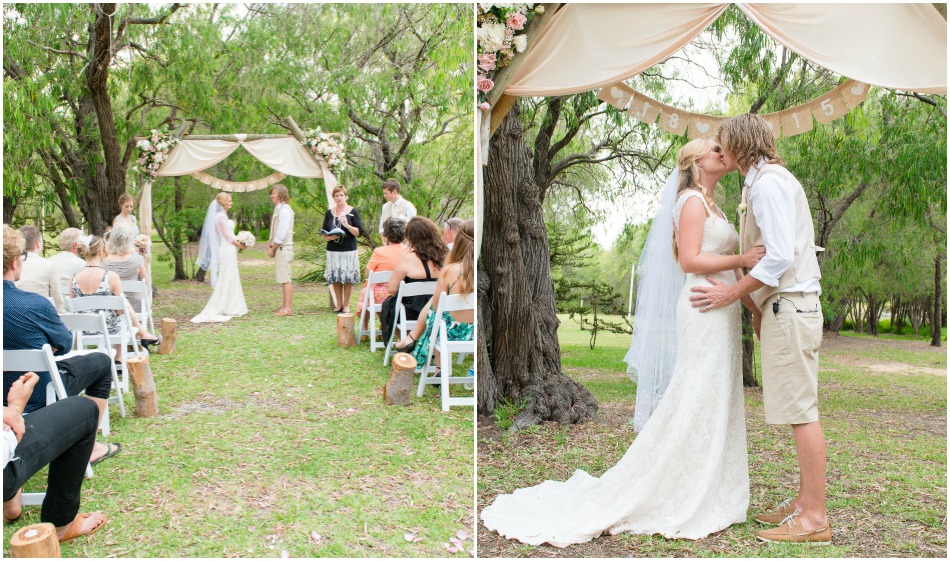 Our celebrant was amazing! From the very first time we met Josie Arnold at the Coast to Country Wedding Fair we had a connection. We loved her sense of humour and we just felt like we were talking to a family member. That was important to us, the connection. We had a few meetings and she asked us for our story. We rarely open up about how we feel about each other to anyone and it Josie really nailed into us that this day was about our love and our future together. We knew we didn't want a traditional wedding and of course you have to say the legal requirements but our vows were relevant to us and our goals in life. Our dog, Molly was also very much a part of the ceremony as the "dog of honor" complete with burlap neckerchief. She was as good as gold! 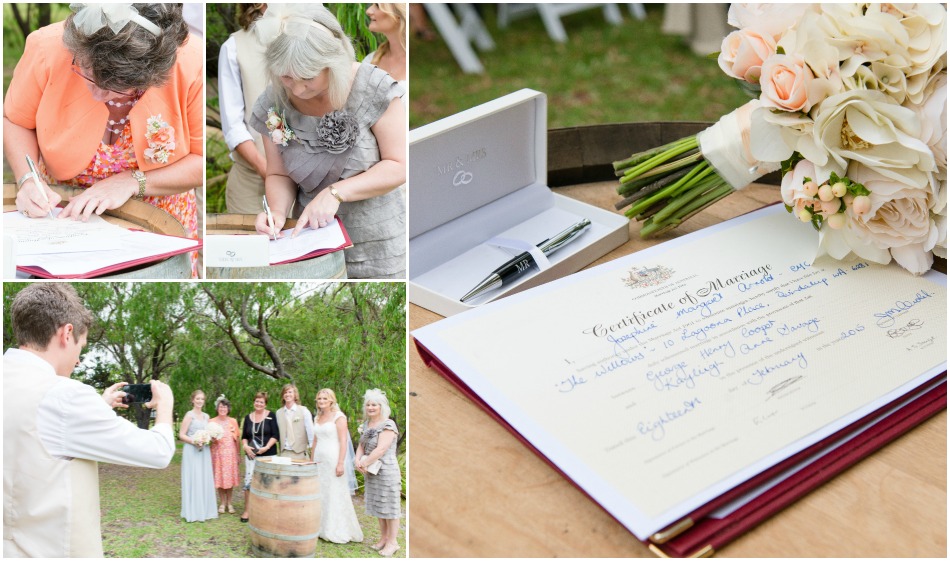 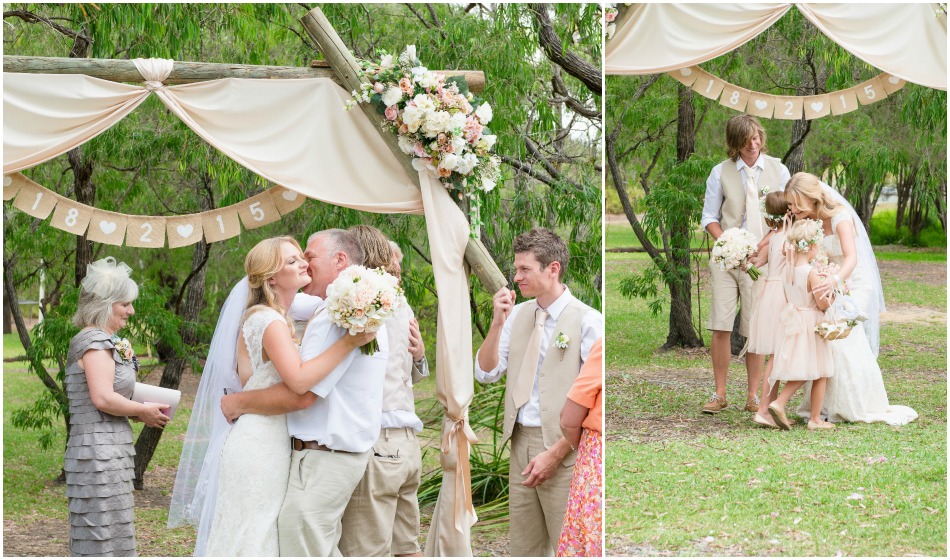 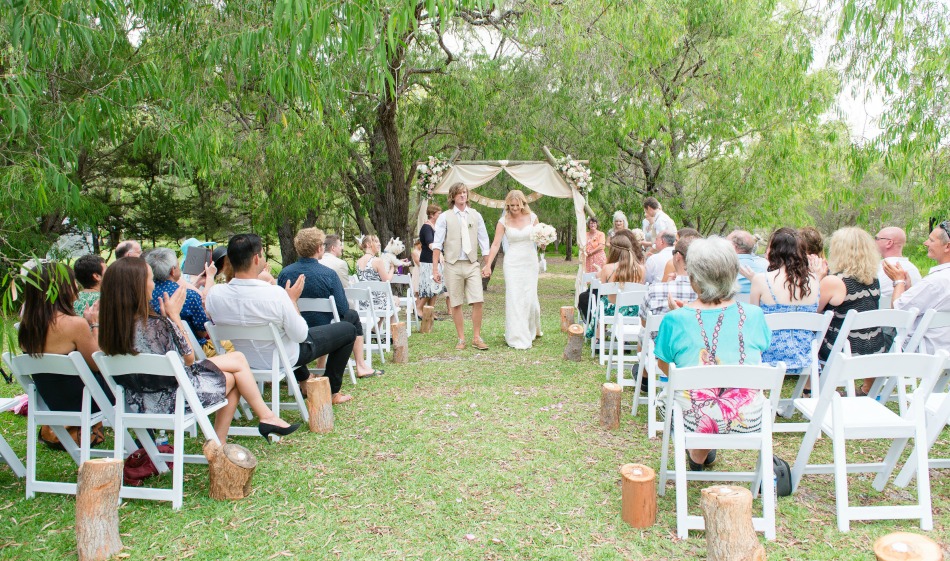 We went for a rustic theme. We both favour toward neutral colours/shades and didn't really have to discuss a set theme, everything just seemed to fit in or fall into place.

As we had family over from the UK for 2 weeks, we put them to work almost straight away. Days were spent exploring the fantastic South west and the beautiful beaches that we are so lucky enough to live in, but we also had days where we were making bunting/lawn games/sign/decorations and of course the arbor. We are so thankful for all their skills and hard work which contributed to our special day. It really wouldn't have been the same without them. 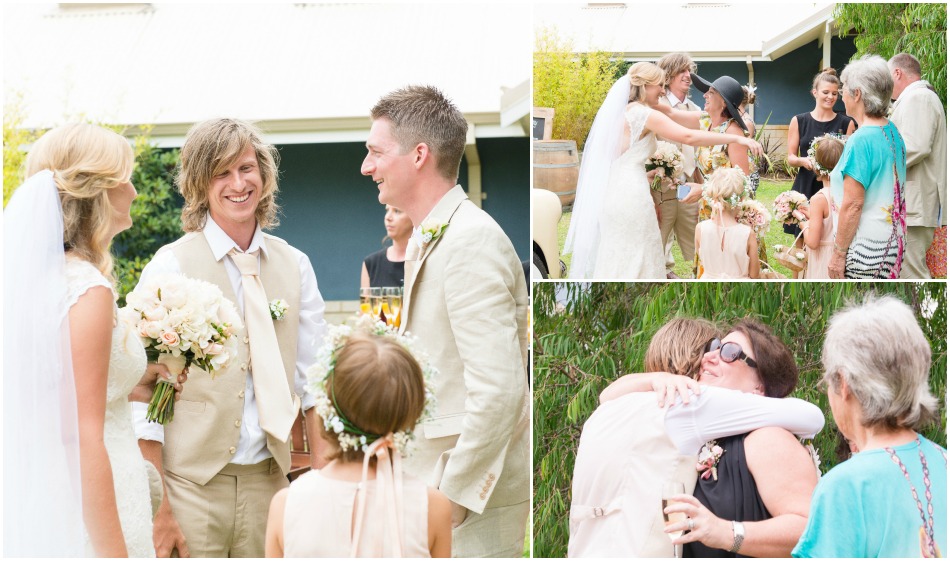 George being quite the handyman, wanted to do everything. With the help of the internet and Pinterest, we had created a mood board of ideas and designs we'd like to feature. Our main concern was entertaining everyone. Not everyone wants to dance or mingle with other people and so that's where the lawn games came into it. We chose simple ones to make that would get the most use. We also made blackboards for the rules and I bought a polaroid camera to make my own picture guestbook, that way you know you get a picture of every single guest.
We had a "wish you were here" wine barrel out of respect for those that couldn't be there.

The arbor was my favourite part and I was so happy that George took my idea and made it a reality.  We chose to go with silk flowers, in case the heat damaged real ones and they just looked amazing, you wouldn't guess that they weren't real!

For the tables I just got some lanterns from ikea and put flameless candles inside. The last minute touch was the logs leading to the arbor. George drilled holes into the wood and placed fake tea lights to sit inside. At night when we were sitting down and eating, we looked over to the arbor and there was this pathway of lights leading up to where we had exchanged our vows just hours before. Everything just seemed to come together in a way we never imagined and its not until you are there in the moment that you realise that all that hard work paid off. 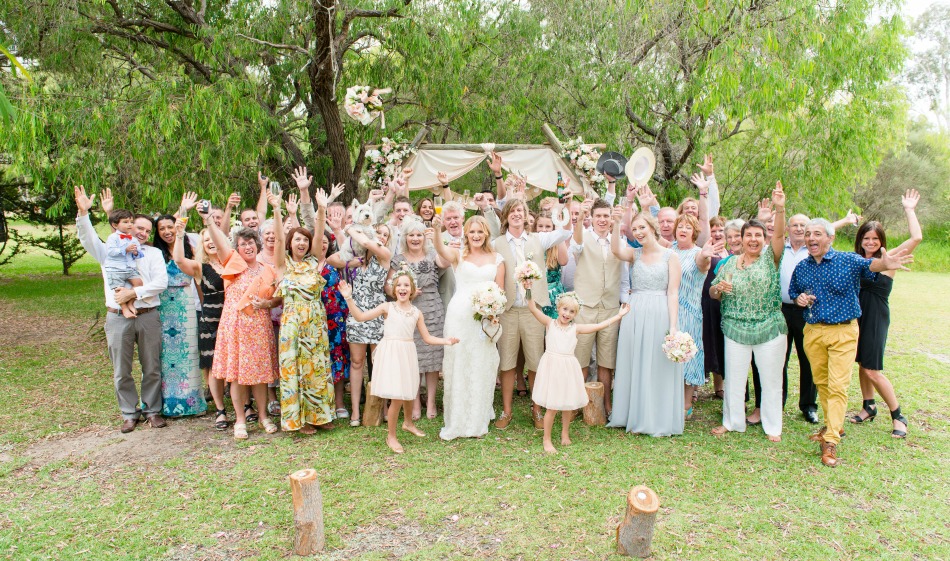 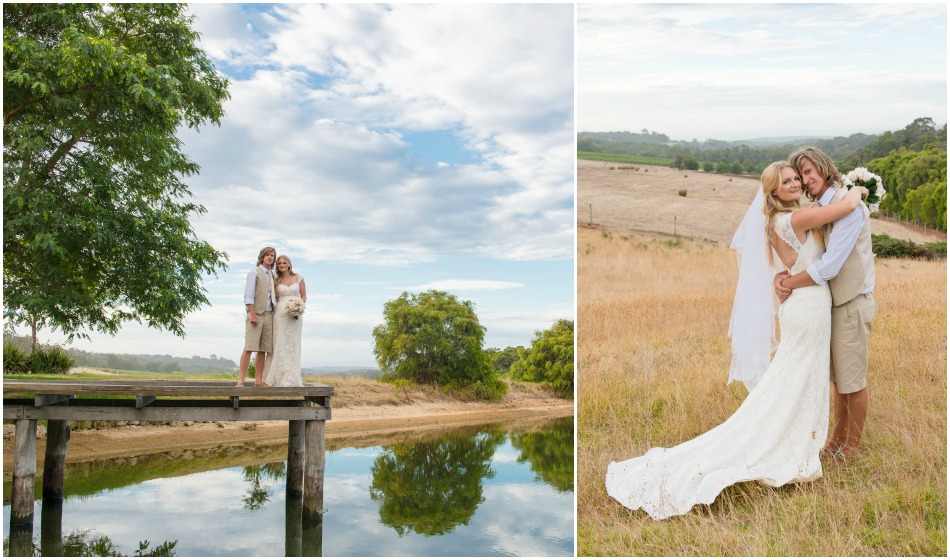 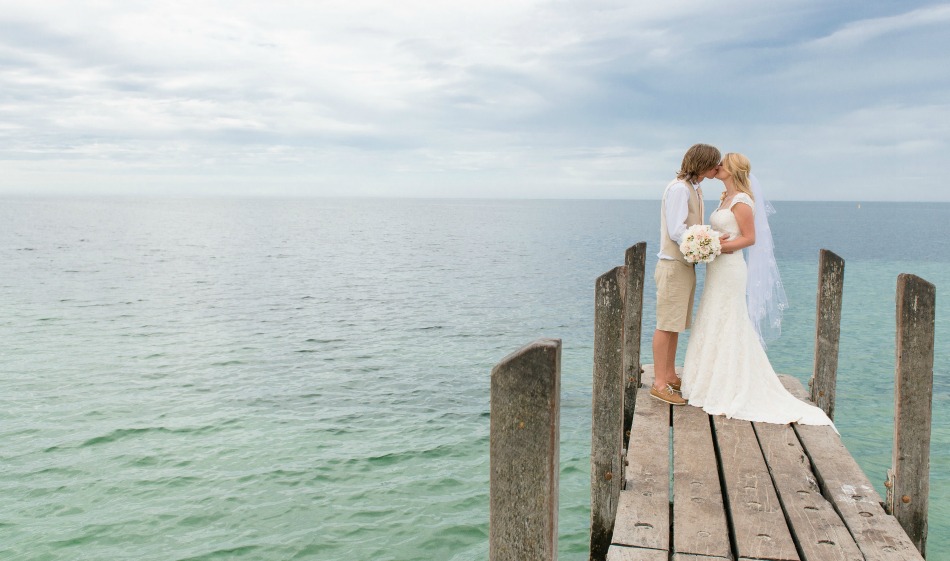 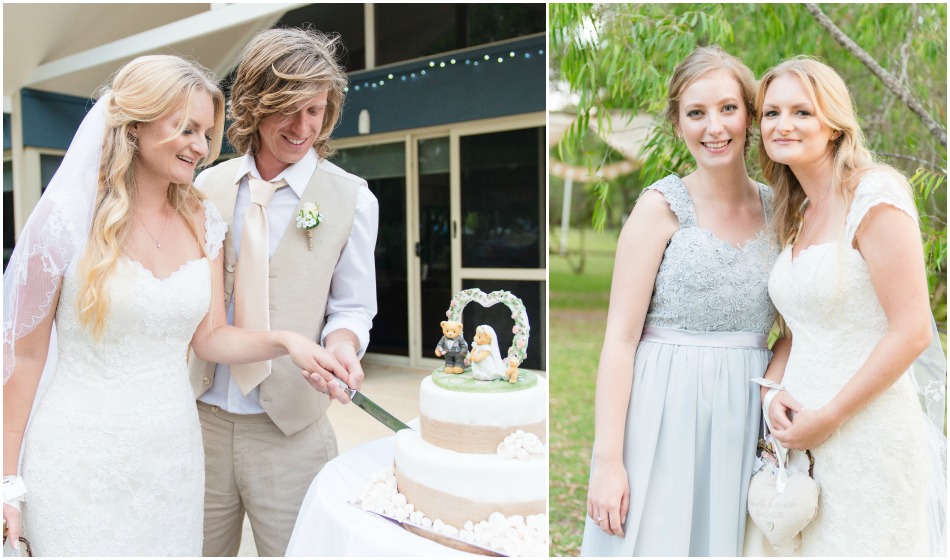 Charcuterie plates were scattered around on wine barrels for guest's while we were out so they had nibbles whilst they played the lawn games. We cut our cake once we were back and then sat for dinner outside.

I was adamant that I didn't want to do a table plan up. We wanted it pretty casual especially only being 44 people. But on the last day, it dawned on us that for it to run smoothly people needed a little direction. Our head table ran perpendicular to 4 rectangle tables under ribbons of fairy lights attached to the huge tree branches above us. As we run our own catering business, we found it easier to do just do it ourselves. Our staff were amazing and did us proud! It was very relaxed with family style sharing platters in the centre of each table with slow cooked meats and yummy salads, it was perfect for a summers night.

After the speeches, we played a little game that I had found on Pinterest, the shoe game, designed to work out how well the bride and groom actually know about each other. They sit back to back while the MC asks questions..."who's the better singer" "Who's the biggest baby when they're sick" It was hilarious and of course too late by this point to back out. We had hired a PA system for the night from our friend and designed our own playlist that we used to dance to.

As we were in a private property, we were very aware about noise restrictions and the final taxi was there at 10.30pm to pick everyone up. which was actually a good time. Its such a long day and although you don't want it to end, its nice to get that respite and be just the two of you. We spent half an hour sitting under the fairy lights and just relaxed. 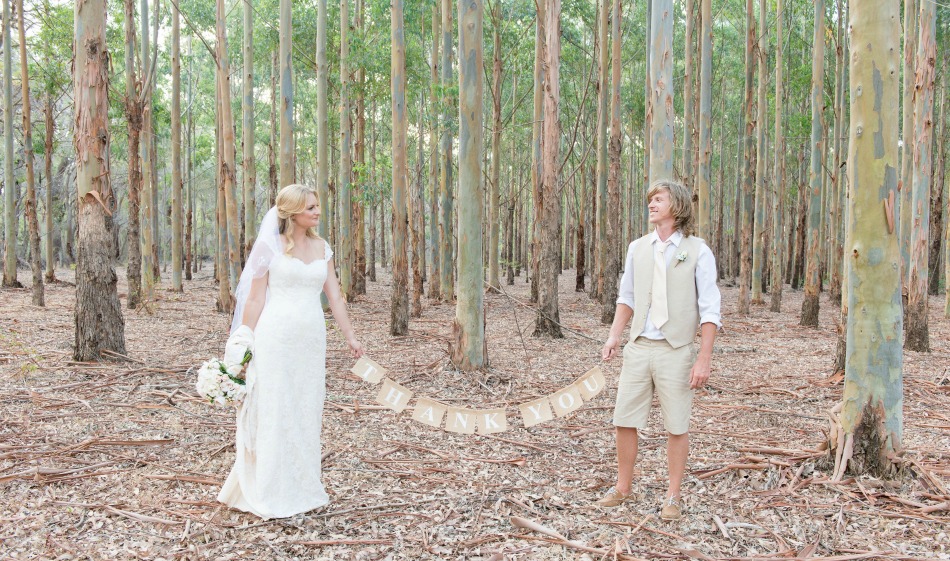 Advice for other Brides planning their wedding:
Its true what they say, it does go so quick so enjoy every moment. Don't worry if not everything you had planned gets done in time, none of your guests will know it was meant to be there. delegate, give other people a few jobs to help and take the pressure off. Its easy to get caught up and stressed out with everything and become a bridezilla, but its not worth it. Pinterest was a big help to me, its a great place to put all your ideas into one place and draw inspiration from.

Is there anything you would do differently if you could have your wedding again?
I think we would pay more attention to the timeline of the day, it just felt like the time just slipped away and we were rushing the speeches a little bit. I would've loved to have outsourced the catering to give George a break and make it a little less stressful. It would of freed up heaps of time that we could've spent with our relatives instead. 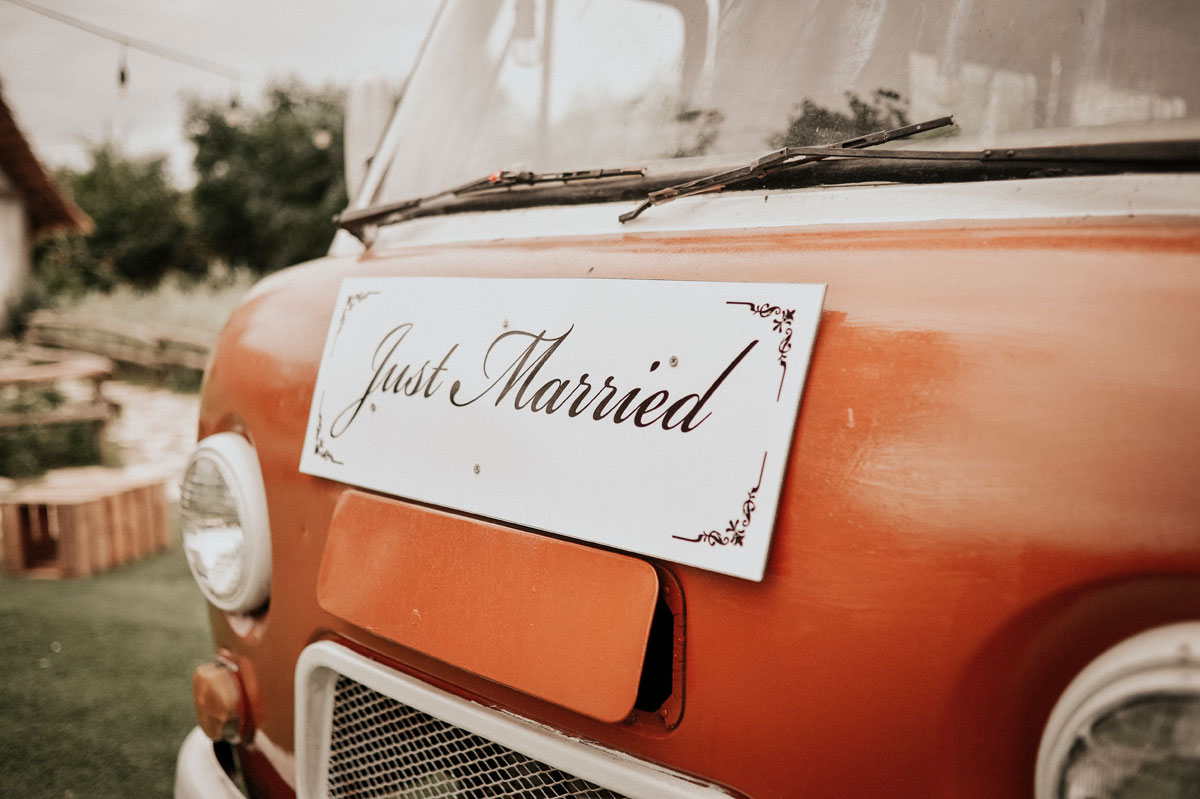